Have You Purposed In Your Heart???
December 2015

"But Daniel purposed in his heart that he would not defile himself...." Daniel 1:8 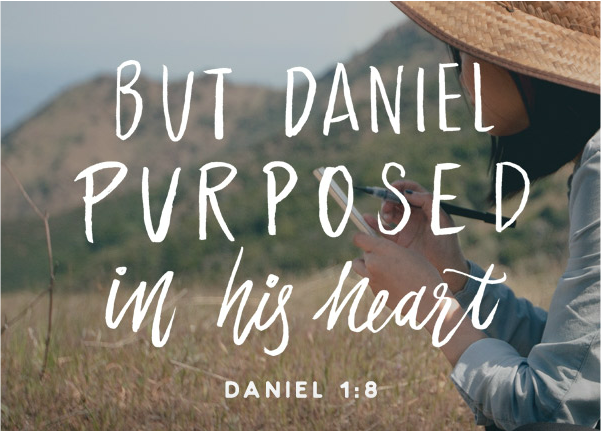 Oh Daniel, what a lesson we will learn from you today. You probably know this story.
Daniel, Hananiah, Mishael, and Azariah were from the tribe of Judah. They were selected  by the King and brought as captives to Babylon. They were strong, healthy, good-looking, well-versed and gifted.
These young men were chosen to not only serve, but to be trained in the language and literature of Babylon.
They were assigned a daily ration of food from the King’s kitchen for three years and were given Babylonian names.
Daniel was named Beltesshazzar, Hananiah was named Shadrach, Mishael was named Meshach, and last, but certainly not least, Azariah was named Abednego.

​Amidst all of the “training” and "offers"….
“…..Daniel purposed in his heart that He would not defile Himself….” Daniel 1:8

​He purposed in his heart that He would not defile himself with the things that the King offered. He took a stand. And because he took a stand, God not only gave him favor with man, but made him and the others look healthier and better nourished than those who had been eating the food assigned by the king. God also gave these four young men an unusual aptitude for understanding every aspect of literature and wisdom and He gave Daniel the special ability to interpret the meanings of visions and dreams. After the training period was over, whenever the King consulted them in any matter requiring wisdom, he found them ten times better/more capable than anybody else in the entire kingdom.

All of this because,
“Daniel purposed in his heart that He would not defile himself…..”

Friend, have you? Have you purposed in your heart to not defile yourself? We are living in a time where so many have “relaxed” or “slightly” drawn back from the Jesus standard. So many compromise to fit in. So many have the mentality that, “It doesn't take all that.” So many fear looking “too deep.” But friend, I write this to not only encourage you, but to also ignite a holy fire on the inside of you. You see, if you are saved, whether you feel it or or not, the hand of God is on your life. No, it may not be that you are called to start a ministry and
be in a pulpit, but best believe, there is something that God has called you to do so that those in your sphere of influence will come to know Him and give Him the glory. You must, must, must take a stand for holiness and righteousness. But let me be clear. I'm not just talking about things like no sex outside of marriage, no drinking, no going to clubs, no cussing, no lying, etc. I'm talking about the seemingly small things that you sense in your spirit that God is calling you away from.

​“So then, my dear ones, just as you have always obeyed [my instructions with enthusiasm], not only in my presence, but now much more in my absence, continue to work out your salvation [that is, cultivate it, bring it to full effect, actively pursue spiritual maturity] with awe-inspired fear and trembling [using serious caution and critical self-evaluation to avoid anything that might offend God or discredit the name of Christ]. For it is [not your strength, but it is] ]God who is effectively at work in you, both to will and to work [that is, strengthening, energizing, and creating in you the longing and the ability to fulfill your purpose] for His good pleasure.”
Philippians 2:12-13 AMP

​Friend, there are some clear cut things that all believers should live by. As stated, things like no sex outside of marriage, no drinking, no lying, no cussing, no gossiping, no pride, etc., but there are also things that although others may do, you may not. Why? Because God has called YOU to a higher calling. This is what it means to work out your own salvation.

Friend, to obey the voice of God and the nudges from the Holy Spirit,
even in areas that in your opinion don't seem that “bad” or “sin” is to in essence work out your
own salvation AND purpose in your heart to not defile yourself.

One thing I have learned in my walk with the Lord is that He can see things that I cannot at times and knows not only what’s ahead, but what He is preparing me for. Those small things do matter.  This is not about being legalistic; this is about being obedient and leaning not onto our own understanding, but acknowledging Him and trusting Him to direct our paths.

“Therefore, if anyone cleanses himself from these things [which are dishonorable—disobedient,
sinful], he will be a vessel for honor, sanctified [set apart for a special purpose and], useful to
the Master, prepared for every good work. Run away from youthful lusts—pursue
righteousness, faith, love, and peace with those [believers] who call on the Lord out of a pure
heart.” 2 Timothy 2:21-22 AMP

Friend, we all want God to use us and get the glory out of our lives. Although when we got saved we were forgiven, made holy, pure, and the righteousness of God in Christ Jesus, there are still some things that we will have to separate ourselves from when God asks or leads us to.
Yes, even those things that don't seem like a big deal. We must both publicly and privately pursue righteousness, faith, love, and peace.
Yes, at times it’s uncomfortable. Yes, at times it seems like God is being "extreme" with you.
Trust me, I understand. Recently, the Lord has been correcting me and leading me to walk away from things that if I shared with you, you would, like I did think, “That’s not that big of a deal.”

For example, anyone that knows me knows that I don't listen to secular music, BUT I'm a romantic at heart and one of my favorite movies is A Preacher’s Wife. I fell in love with this movie as a child, mainly because of the great Whitney Houston. Boy, could she siiinnnng! My favorite song of hers is I Believe in You and Me.  Friend, I've dreamed of walking up the aisle to this song while my fine, anointed husband (whoever he is lol!) siiiinnngggggs! Tears flow. People stand in awe. And God is glorified…..amen! Friend, I had it so bad that I listened to this song at least twice a week while simultaneously envisioning my wedding. Well, recently the Lord has been drawing me away from it. No, it's not a vulgar song. No, to me it's not “that big of a deal.” But nevertheless, I sensed in my spirit that He wanted me to lay it down.


Well, eventually I understood why God was leading me to lay it down. You see, it's kind of hard to sing “I Believe in You and Me” when you don't have a “You.” Lol! While I was singing, the enemy was trying to make me over anxious about marriage and discontent in singleness.
He was trying to sow a seed of distraction. Yes, I still love it. Yes, it will probably be one of the songs at my wedding. But I refuse to defile myself. I refuse to open the door to anything that's not of God or not from God/approved by Him in this season. I want God to get the glory out of my life, not just publicly, but privately too! I don't want to preach “Focus on God! Trust Him!” But in private be distracted, discontent, anxious and walking in fear. No ma’am!

So friend, what's the Lord been drawing you away from? Big or small…..trust Him and obey.
You may say, “Well Raven, I'm obeying and doing all I know to do, but nothing seems to be changing, happening, or manifesting.”
Again, trust me, I understand. On days when I don't feel like being obedient and/or just want to give up, I remind myself of this promise……

“Peter started saying to Him, “Look, we have given up everything and followed You [becoming
Your disciples and accepting You as Teacher and Lord].” Jesus said, “I assure you and most
solemnly say to you, there is no one who has given up a house or brothers or sisters or mother
or father or children or farms, for My sake and for the gospel’s sake, who will not receive a
hundred times as much now in the present age—houses and brothers and sisters and mothers
and children and farms—along with persecutions; and in the age to come, eternal life.”
Mark 10:28-30 AMP

Friend, whatever it is that you have left for the sake of God and the Gospel, it is not in vain! You will be rewarded 100-fold in THIS LIFE and in eternity!!!! I don't know about you, but on hard days when I need encouragement, I read these scriptures, put a smile on my face, flip my hair, and walk with my head held high believing and expecting the reward that God promises those who diligently seek Him.
Friend, you're not alone. God has not forgotten you. He sees your faithfulness in big and seemingly small areas, takes note, and calls it success. Wake up every day in expectation that whatever it is that you are believing God for will manifest in due time.
If it doesn't manifest today, tomorrow, or next week, don't you dare get discouraged, just remind yourself that God is not a liar!
If He said it, He will do it! The same way He rewarded Daniel and the others for taking a stand and for purposing in their hearts not to defile themselves, He will do the same for you! So stay with Him. Stay diligent. Stay faithful. Stay obedient. Stay in faith. Stay in expectation.
Due season ALWAYS comes!!