Heavenly Beauty = An Emptying of Self
July 2015 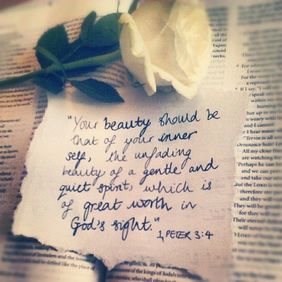 “The women throughout Christian history who have truly glowed with heavenly beauty all had one thing in common – an emptying of self.  They were so caught up in the things of God that they gave no thought to their own lives.  They did not seek to draw eyes to themselves. They sought to bring glory to Jesus Christ alone.

As a result, they were some of the most confident, poised and courageous women that have ever lived.  They accomplished amazing things for the Kingdom of God. They saved lives. They stood before Kings. They rescued dying children. They reformed societies.

In a world where women are full of themselves, their lives, their selfies...Who can find a virtuous woman? A woman who has a servant's heart? A woman who doesn't have to be recognized or awarded? Her price is far above rubies! ~AJS~
Comments