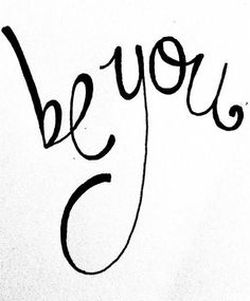 "As Samuel grew old, he appointed his sons to be judges over Israel. Joel and Abijah, his oldest sons, held court in Beersheba. But they were not like their father, for they were greedy for money. They accepted bribes and perverted justice. Finally, all the elders of Israel met at Ramah to discuss the matter with Samuel. “Look,” they told him, “you are now old, and your sons are not like you. Give us a king to judge us like all the other nations have. But the people refused to listen to Samuel’s warning. “Even so, we still want a king,” they said. “We want to be like the nations around us. Our king will judge us and lead us into battle.” 1 Samuel 8:1-5,19-20
Have you ever thought that the grass was greener on the other side? Have you ever looked at someone else's life and thought, "Man, they have it all together?" Have you ever wanted to look like someone else? Have you ever doubted your gifts or what God has called you to do because someone else seems more effective or popular than you? Have you ever wanted something because you wanted to be like the person who had it? Now, I'm not talking about admiring or looking up to someone, but I am talking about wanting to be like other people (or wanting their life) because you "think" that God made some kind of mistake with you.The Israelites are a great example of this. They wanted a king so they could be like all the other nations. Here's the thing: The Israelites already had an identity. They were the chosen people of God! But their desire to be like everybody else made them lose sight of what they ALREADY had and most importantly, who they were. Listen friend, the enemy is after your identity. For those of us who are saved, he knows that he can not do anything about where we spend eternity, but if we allow him to, he can cause us to be ineffective on earth. How? By making us doubt who we are and what we are called and anointed to do. So, how does he try to accomplish this plan and what can we do to fight back?
Two words: Distractions and the secret place.

Friend, the plan of the enemy is to keep your eyes on ANYTHING other than God and His Word. So, what does he do....he creates a distraction and it usually involves people. If it's not what people say, it's what they don't say. If it's not social media, it's this world's definition of success and beauty. AND if none of that works he'll start whispering things into your ear like, "She's better than you. Look at how they respond to him and his gift. Man, God must have forgotten about you." Lies. ALL LIES!

The truth is, the reason why many believers are not happy or confident with who God called and made them to be is because they are not spending time with God or in His Word! The less you spend time with Truth the easier it is to believe lies like, "You're not good enough. God won't use you. In order to be effective you have to act like, speak like, sing like, look like, etc., him/her."

God desires to have a personal intimate relationship with each of His children...not just a select few. If you are reading this, the Lord is inviting you into the secret place. All you have to do is be willing to spend time seeking His face, draw near to Him, and He promises that He will draw near to you. Will you accept this invitation? He wants YOU! He wants you to know who you are, what you have been called to do, and to finally stop overvaluing what you are not and undervaluing what you are. He wants you to live the abundant life that He came to give you. He wants you, friend to be undistracted, having a 'single eye' for Him and Him alone. Elisabeth Elliot once said, "Whatever might blur the vision God had given her of His work, whatever could distract or deceive or tempt her to seek anything but the Lord Jesus Himself she tried to eliminate.”  Friend, God has some great things in store for every child of His that has given their life to Him and has given Him a 'yes.' Don't let the devil deceive you.....YOU are called to do a mighty work for God and there are STILL great things that God is going to do in you, for you, and through you. Is there anything distracting, deceiving, tempting, or hindering you that you know God wants you to eliminate? Is it social media, friends, relationships, etc.? "Be assured, if you walk with Him and look to Him, and expect help from Him, He will never fail you."

Friend, if you don't get anything else from the post....get this: There's room for YOU. There's need of YOU. There's a position for YOU. There's a purpose for YOU. The body of Christ needs you to be you! YOU are valuable.  If you have God gifts and talents that others choose to ignore, keep following hard after Jesus and stay faithful. God will open doors for YOU that no man can slam shut! YOU are LOVED, CHOSEN, APPROVED, and ANOINTED by GOD! Once again, you have gifts and talents that the body of Christ needs! STOP listening to your fears and insecurities; their goal is to hinder and delay you! STOP focusing on 'she is/he is, I'm not!' Instead, focus on 'He (God) is therefore I am! Get in the Word and develop a more intimate relationship with Christ. I promise you that the deeper you go and the more you dwell in the secret place the more you will see yourself the way that He sees you! You won't want to be like anybody else because you will be so excited about what God has done, is doing, and will do in you, for you, and through you! I speak deliverance, boldness, freedom, joy, and peace over you right now! You will have confidence in the wonderful gifts, talents, and abilities God has given to you and YOU will stand up, step out, and do what HE has called YOU to do!!! I'm praying and rooting for YOU because the body of Christ needs YOU to be YOU!!!!