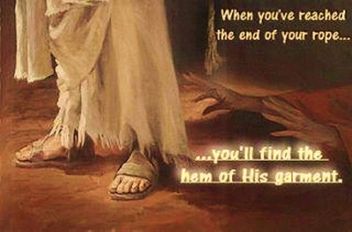 "Jesus turned around, and when he saw her he said, “Daughter, be encouraged! Your faith has made you well.” And the woman was healed at that moment."
Matthew 9:22 NLT

It's easy to quit, but it takes faith to press on to victory.

"She's got issues!" Have you ever said this or at least thought this about someone? Better yet, have you been this someone.....the someone who has issues that everybody and their momma knows about? In the ninth chapter of Matthew we meet a woman. She has no name, no "degree," no friends, but she does have something.....an issue, one of which she suffered with for 12 years. She was probably ostracized, persecuted, put down, and talked horribly about all because of her issue. Our issues may not be as severe as hers, so to speak, but many of us can relate. Issues such as sleepless nights, sadness, depression, loneliness, fear, anxiety, worry, broken heart, discouragement, feelings of despair and emptiness, etc., plagues many believers. Some of us even have "issues" that we feel are not that important! We say, "People are hungry and I'm upset because so in so doesn't want to be my friend anymore, or because I'm still single".....you get the message. Just like this woman, we have looked and looked and looked and tried and tried and tried to find something or someone, anyone to heal us and make us whole. This woman in the midst of her suffering made a choice....she made up her mind to be healed. This woman said, “If I can just touch His robe, I will be healed” (Matthew 9:21). Not only did she make up her mind, but she put some feet to her faith (for we walk by faith and not by sight 2 Corinthians 5:7) because she knew that one moment in the presence of Jesus could change her life. Notice she did not say, I "could" be healed or "maybe" I'll be healed......she said I WILL be healed. Friend, never underestimate a made up mind and some faith filled feet! Everything and everyone had failed this woman. Everything and everyone that probably worked for everybody else, didn't work for her. She had every reason to give up and just wait to die, never being changed. But even though no one and nothing seemed to be able to fix what was broken, she still believed and took the last ounce of faith that she had left ("I tell you the truth, if you had faith even as small as a mustard seed, you could say to this mountain, 'Move from here to there,' and it would move. Nothing would be impossible." Matthew 17:20 NLT) and reached out and touched the hem of His garment. Kari Jobe's song 'Healer' comes to mind when I think of this. "I believe You're my healer. I believe You are all I need. I believe You're my portion. I believe You're more than enough for me. Jesus, You're all I need." She reached past the crowd, she ignored their pushing and their haughty looks....she pressed in believing that just one touch could make the difference in her life. Friend, I'm sure you've tried all that you could have tried to fix whatever it is that is broken, but have you reached out to Jesus? Sure. You may think just like this woman that your issue is not that important. After all, Jesus was on his way to the house of a dying girl. You may think that whatever it is that you are struggling with is "normal" and you just have to learn to live with it, but my friend Jesus came so that we may "have and enjoy life, and have it in abundance (to the full, till it overflows)" (John 10:10 AMP). The Word also says:

Friend, I don't know about you, but these scriptures tell me that I have no business living life depressed, discouraged, fearful, anxious, lonely, or being oppressed by any of those other issues! Why? Because Jesus died and rose again defeating death, hell, and the grave so that I could be free, whole, and HEALED! Don't let the enemy trick you into thinking that this is how life is going to be! Jesus has more for you......it's time you reach out, take a hold of Him, and NEVER let go!  "Jesus turned around, and when he saw her he said, “Daughter, be encouraged! Your faith has made you well.” And the woman was healed at that moment" (Matthew 9:22 NLT). I love this. Jesus, in this huge crowd of people recognize one touch. I'm sure many people were rubbing up against Him and tapping Him trying to get His attention, but he recognized only one touch.....the touch of faith! I'm so glad we serve a God who is compassionate and cares about the things that we are going through, but I am equally astounded at the fact that although He cares for us and loves us fiercely, He does not move as a result of our tears, worries, or fears. He challenges us to live, walk, and talk like Him, by responding only to our faith! He knew she had been discouraged, but He said, "Be encouraged!" What a word! Sometimes, we just need someone to say, "Be encouraged! I see YOU!" But He didn't stop there, even though many people do. He said your FAITH, not your tears, not your pain, not your worries or fears, but YOUR FAITH has made you well and she was HEALED. Friend, I don't know what it is that you would define as your issue, but you must press through the "crowd" of your feelings, your pain, your tears, your worries, and your fears, and reach out and touch Jesus ("Draw near to God and He will draw near to you" James 4:8). Do as this woman did and make up your mind and put some feet to your faith and a Word in your mouth and stick with it. Know that it's easy to quit, but it takes faith to press on to victory. Press on to victory friend.....press on in FAITH! He sees. He cares. He knows. All it takes is one touch of faith.
Comments