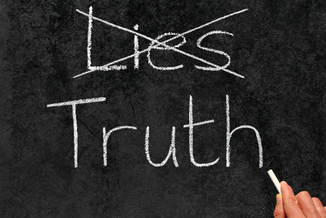 Who told you you were a failure? Who told you that you were not good enough? Who told you that God can't do it and that He would fail you? Friend, the devil is a liar! It's time that we as believers know who and whose we are and believe Truth and not the lies of Satan. He is under our feet (Ephesians 1:22). He has no power and when it's all said and done, what God said will be done! Sure. It may look one way, but that's why we walk by faith and not by sight. Sure. It may not "feel" good, but as believers we are never to be led by our "feelings" anyway. Sure others may laugh and mock you. They may say that you will  never make it, but God is not moved by the opinions of others and you should not be either. Before you were formed in your mother's womb, He knew you, chose you, loved you, anointed you, and had His mind on YOU! He did not back then and does not right now have to consult with folks or get their approval when it concerns your identity and destiny. Who told you those negative things? Not God….Satan did. Friend, here's the truth. You are more than a conqueror, above and not beneath! You wear the Victor's crown and have already overcome! You are enough friend. You are enough because of Christ! God can and God will open doors that no man slam shut and create doors so that His glory will be seen! He is who He says He is and can do what He says He can do! You have no need that exceeds God's power. Faith, friend is God's favorite invitation to RSVP with proof. Beware of the lies of Satan! Believing Satan's lies can and will cause you to be in fear, doubt, and unbelief and not in faith! That's his goal. That's what He wants. DO NOT GIVE IN OR GIVE UP! Stay in FAITH! Faith pleases God (Hebrews 11:6) and it is according to your faith; not your peers, not your fears, not your worries, not your doubts----will it be done to you! (Matthew 9:29) You must believe God. You must be fully persuaded that God has the power to do what He has promised (Romans 4:21). Know this: God never ever ever breaks His promises. He is the God of miracles (Psalm 77:12-14). Ask Him to lead you where your trust is without borders. Let God be God and let satan be satan (a liar, a loser, and a fool)! Believe that God can do His job and believe that He loves you and that His unfailing love for you will not be moved (Isaiah 54:10). Believe God friend. Believe God and always remember that satan is under your feet! So if he has anything to say to you, tell him to write it on the bottom of your shoes!