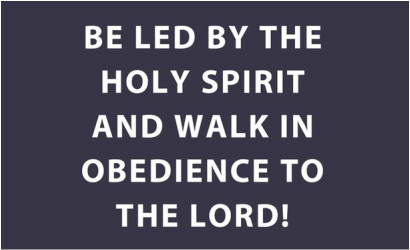 "Since we are living by the Spirit, let us follow the Spirit's leading in EVERY PART of our lives!" Galatians 5:25 NLT

The other night my mom, sister, and I went to the movies planning to see a particular movie, but after going out to eat and chit-chatting for a while, the times for that particular movie were too late. A little disappointed, we decided to look online to see if there were any other movies available that we wanted to see. Only ONE movie was opened at that time and I said, "Let's go see it!" Right when I said it the Holy Spirit began to convict me. Now, mind you we were STILL at the restaurant! So, "ignoring" this persistent, still small voice we preceded to get into the car and drive to the movie theatre. Now, funny thing is WE ALL FELT SOME TYPE OF WAY ABOUT THIS MOVIE, but because we really wanted to go to the movies we "ignored" His voice. Before I finish this story, I must let you know that I had emphatically stated that I was not going to see this particular movie based on the previews and reviews. Well.....once we got to the movies, the girl that emphatically stated that she was not going to see this particular movie paid $30 for the tickets. Friend, while I was giving the young lady the money my spirit once again said, "You know you don't need to see this movie." Nevertheless, I took the tickets and we three set out to go see this infamous thing! lol! We then arrived at theatre 16 and as we were walking up the stairs my mom thought that she saw somebody she knew and almost fell! (If that's not a sign I don't know what is...lol!) For those of you who don't know my mom, let me tell you that she is definitely someone that does not care what anybody thinks of her, but even she felt uneasy about the thought of someone seeing us in this particular movie. After laughing our heads off, my sister leans over to me and says, "Maybe we shouldn't see this." Me, the "older sister" said, "Maybe it won't be too bad." Right when I said that, the Holy Spirit once again started talking. This time He said, "Raven, you don't even really want to see this. Why don't you just leave." I then said, "But Lord, I paid $30 (I'm laughing as I type this....what a CRAZY excuse)." He then said, "You can STILL walk out NOW." Still seated the movie started. Friend, we were not in a good 5 minutes of the movie when an inappropriate scene popped up. During this scene my sister and I turned our heads and my mom, in shock stretched her arm across me trying to cover up my sister's face (my mom is 4'11", so you imagine her trying to reach over me to get to my sister....lol!) it was then when we all agreed to leave and proceeded to get up and get out!!!

So, you're probably wondering why I'm sharing this story. That night while I was sitting in my bed having my quiet time with the Lord I began to repent for being disobedient  and it was then that the Lord gave me this message. Listen friend, when you are saved and really have a heart for God that desires to please Him, you won't be able to do just any and everything or entertain just any and everything comfortably! Sure, the Holy Spirit is a gentleman, but He is also persistent and He will continue to convict and draw you. Yes, we can override Him by ignoring His instructions, but why do that when we know that HE does have our BEST interest at heart. It's not enough just to SAY we're going to do something! It's not enough to shout and dance over the fact that we HEARD God's voice. We must learn to say 'Yes' to God's leading. We must learn to not only be Spirit led in every part of our lives, but to also WALK in OBEDIENCE!

I can remember when I was in High school and a lovely woman of God who also attends my home church and is a missionary use to do my hair. As you probably know, the hair salon is where many women get to know each other, laugh, and just have fun. This awesome woman became one of my MANY favorites in my home church because she would always share her words of wisdom with me. One day she told me some of her story and why she doesn't wear pants. Now before you start yelling and before you stop reading....hear me out. She has 3 daughters and ALL of them wear pants. She does not and neither do I think wearing pants is a sin....I wear them too! (Whew! I'm glad we got that out of the way lol!....) But one thing she told me back then that stayed with me all of these years is, "When God saved me and delivered me I made the vow to not wear pants as a commitment to Him!" Why did I share this woman's story? Because although there are concrete things in the Word of God that every born again believer should live by. there are some specific things that God may lead YOU to do. In other words, God might deal with YOU about something that no one else would think anything about. But friend, if you want to grow in God, YOU must be quick to hear and change EVEN the LITTLE things. This is not about being legalistic or "religious." This is about being obedient and having a relationship with Jesus, one of which you are so in love with Him that saying yes to Him no longer is a discipline of your heart, but rather the delight of your life!

I don't know who this is for, but has God been nudging you in a specific area? Have you been entertaining something or someone in which you don't have peace about? It maybe something huge or maybe it's something small that nobody would think anything of, but whatever it is, once again I will say that THERE IS ALWAYS A BLESSING ON THE OTHER SIDE OF YOUR OBEDIENCE! When my mom, sister, and I walked out of that movie to our surprise the movie that we wanted to see was playing at that time as well!!!! Yes God!!!!
So, don't delay! Be courageously obedient. Say 'yes' to God's leading! I promise you won't regret it!